I find it amusing when people talk about the “sound” of the magnet in pickups :-). The magnet has no sound! If you don’t believe me, perhaps you might reconsider if it’s coming from Bill Lawrence. Here’s what he has to say on the matter:

When I read that ceramic magnets sound harsh and alnico magnets sound sweet, I ask myself, ” Who the hell preaches such nonsense?” There are harsh-sounding pickups with alnico magnets and sweet-sounding pickups with ceramic magnets and vice-versa! A magnet by itself has no sound, and as a part of a pickup, the magnet is simply the source to provide the magnetic field for the strings. The important factor is the design of a magnetic circuit which establishes what magnet to use.

It does not really matter which magnet you use as long as the magnetic circuit is properly designed within sensible parameters. One design consideration is the total magnetic pull the magnets exert on the strings. Too strong, and you’ll get “stratitis” (No, it’s not some kind of ailment amongst guitar players ;-). Another important factor is magnetic flux variance versus distance, following the inverse square law. Simply put, magnetic pull decreases as the square of the distance from the magnet. Hence, the choice of magnet may influence the string displacement as it vibrates over the magnetic field.

The graph below plots this 1/d² curve for a small powerful magnet (e.g. Neodymium) over a distance of 1mm to 6mm from the top of the magnet. Don’t worry about the actual figures. These do not matter at this point. What matters is the shape of the curve. The ideal distance of the strings from the pickup is the point where you see a relatively straight line. In this case, a distance of 3mm to 4mm looks reasonable. 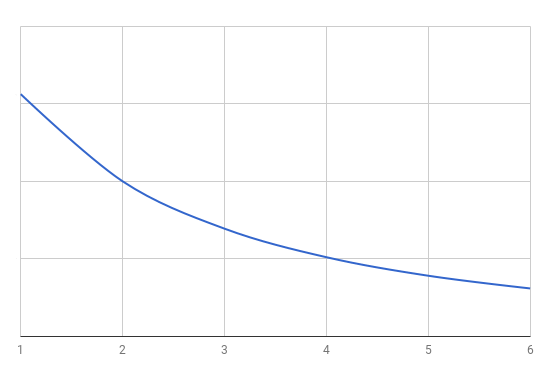 Now compare the graph above with another 1/d² graph, this time for a bigger, but less powerful magnet (e.g. Ceramic). Again, don’t worry about the actual figures. What matters is the curve. Notice that in this case, the curve is “flatter”, less curvy, than above. So, barring excessive magnetic pull, the response is more or less uniform anywhere from a distance of 1mm to 6mm (or more) from the pickup. As a general rule, it gets flatter the farther you move away from pickup, but then of course, the lesser the generated output. You’d want to choose the “sweet spot” for each pickup, depending on what magnet is used. 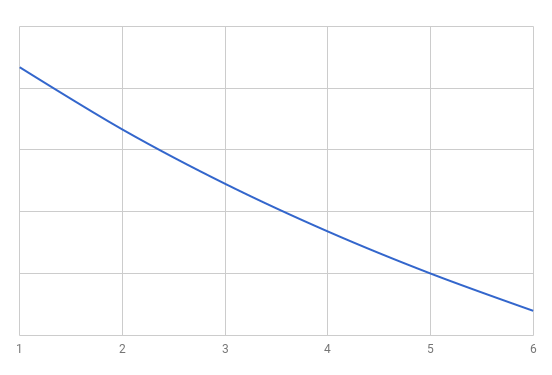 The graph below are actual the gauss level comparison of various pickups including our XR series pickup and the upcoming Modula universal pickup, currently being developed. The gauss level of each pickup is measured using a gauss meter using a hall-effect sensor positioned from 1mm to 6mm.

As expected, like in the charts above, the Modula and XR graphs are more “curvy” compared to other pickups, except perhaps the Strat’s pickup. The Gibson is a 1990s Les Paul Studio, BTW, with its stock pickups. The Modula even exceeds the magnetic strength of the Strat’s, from 2.5mm down to 1mm, though we are using much smaller magnets. Yet, you simply do not position the pickups that close to the strings. Notice too that at 4.5mm, the Modula’s magnetic strength crosses that of the Les Paul and EMG81.

And… these graphs do not tell the whole story anyway. Read on… 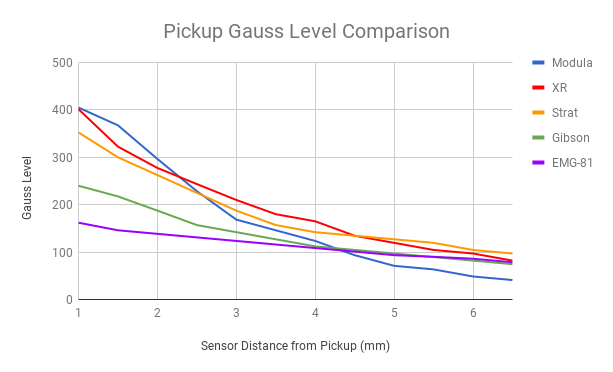 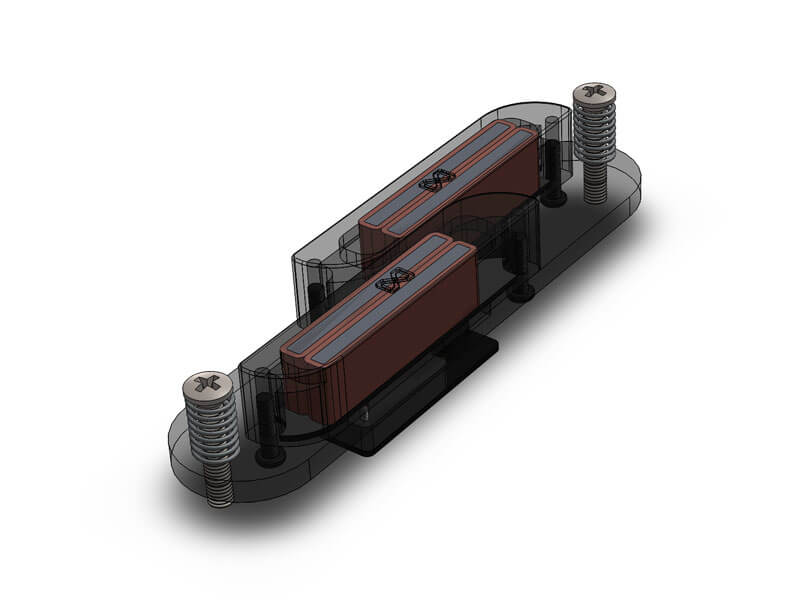 In the graphs above, we measured the magnetic strength of the Modula pickup at its strongest point. In reality it is not that simple because there are actually two magnets oriented with opposing magnetic polarities. One is north facing up while another is south facing up. The FEMM image below shows the flux densities viewed from the left side of the pickup magnetic core: 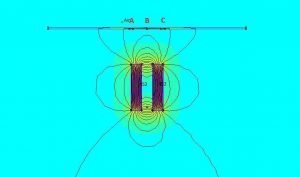 The magnetic flux of the opposing magnets cancel each other out at the middle. The net magnetic flux is weaker than that of the Strat. There are no stratitis issues to worry about. The dual coils make it more interestingly complex. The following graphs show various measurements at various points around the magnetic cores and reveal some interesting magnetic characteristics of such small tightly coupled opposing magnets. 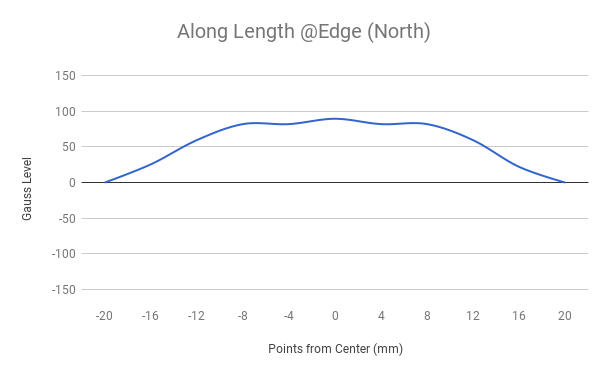 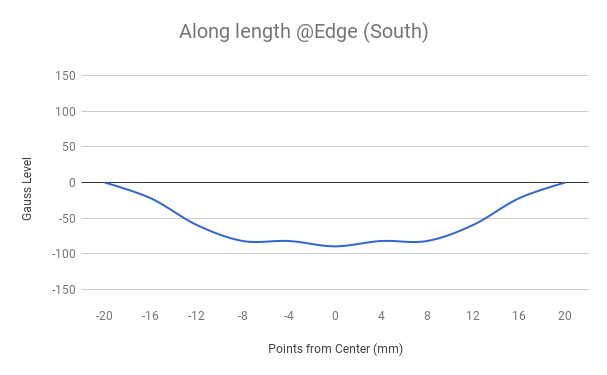 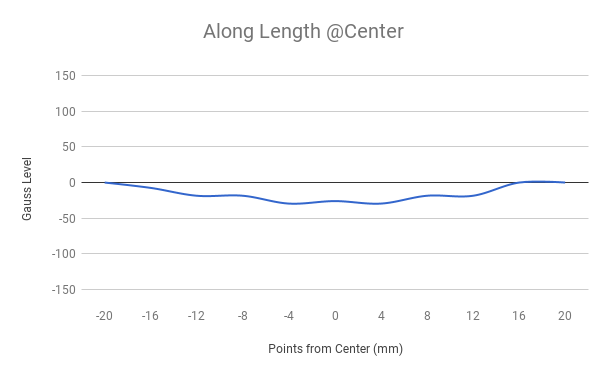 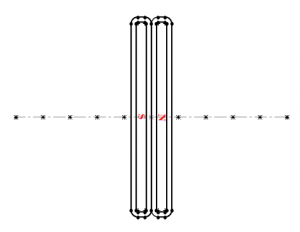 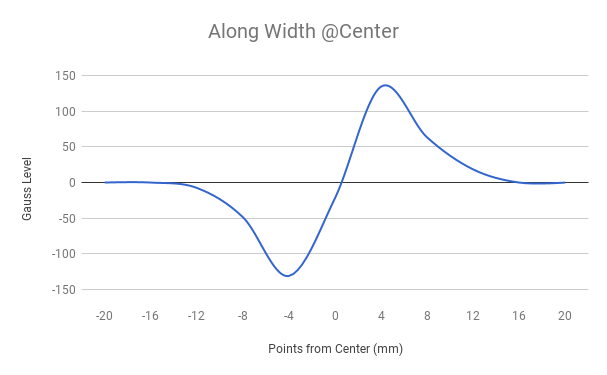 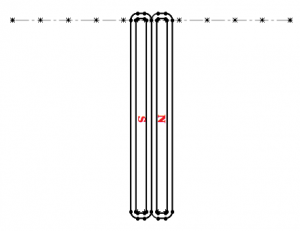 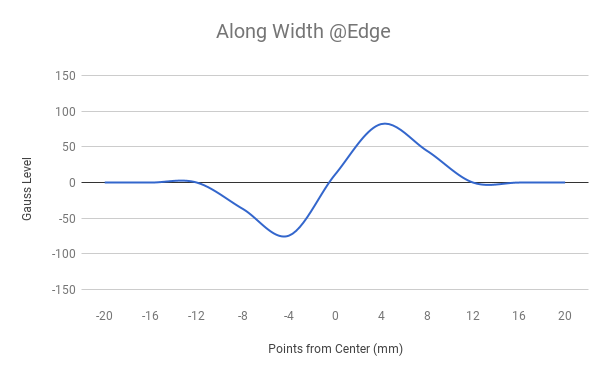