Skip to content
The Nu modular single-string pickups are active pickups utilizing low impedance coils, and an integrated low-power, low-noise preamplifier. The pickups are modular and can be used individually or in groups. The Nu pickups are general purpose, and successfully utilized in various musical instruments such as guitars from 6 strings to 12 strings, lap steel guitars, electric bass guitars from 4 strings to 6 strings, upright bass, cellos, the hurdy-gurdy, and other experimental musical instruments. 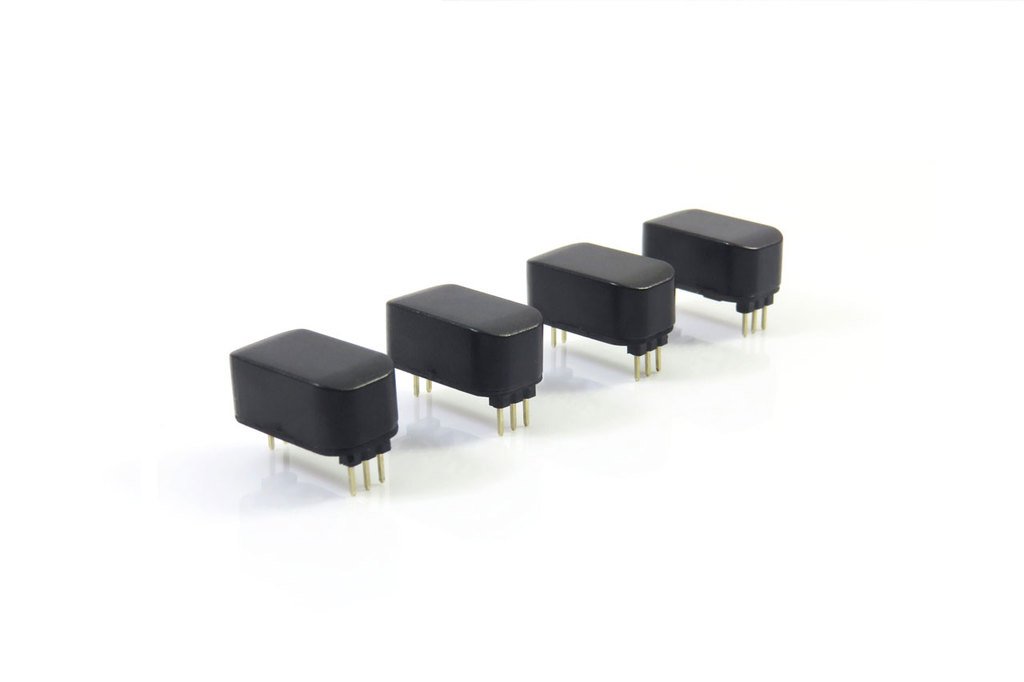 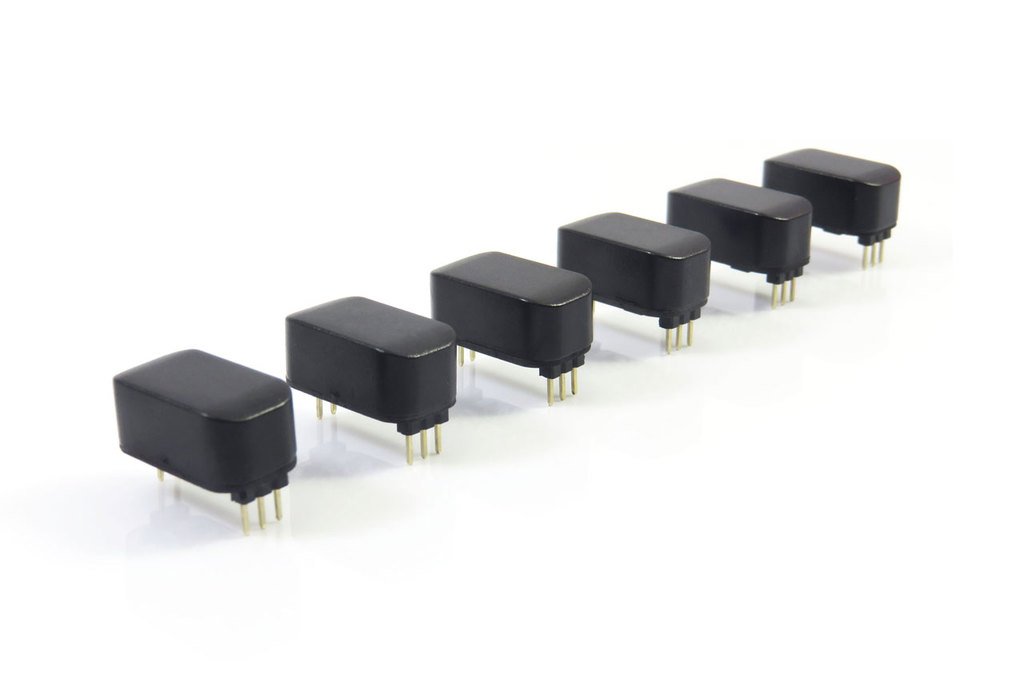 The Nu Series active polyphonic pickups have a uniform frequency response from 20Hz to 20Khz. The sound is very clean with lots of overtones and crystal clear highs. The low impedance coils give the pickups its characteristic wide bandwidth.

Unlike traditional high-impedance passive pickups, there are no big peaks and dips in the response. Such a wide and flat frequency response gives you the freedom to sculpt the tone using analog or digital filters. The low-impedance pickup imparts very little coloration to the sound. You get whatever tone you want using appropriate tone-shaping EQ rather than a fixed, predetermined tone.

See Sculpting the Tone for details about the sound clips. The multichannel recordings take advantage of the stereo field to great effect. For best results, put on a good set of headphones or better yet, have your reference monitors ready, or a good HiFi stereo system. Cheap earphones or laptop speakers won’t do this justice, please don’t bother using those!

Here’s a short clip: Vale Vanezolano no.3 (by Antonio Lauro) recorded using “classical” EQ capture of the Cycfi Nu multichannel pickup mounted on a Fender Stratocaster in the bridge position. The strings are panned with the low-E center, A at 3 o’clock, D at 10 o’clock, G at 4 o’clock, B center and high-E at 9 o’clock. Listen to how the notes seemingly chase each other in the stereo field.

Here’s a short composition: Thousand Paths (Joel de Guzman 2014). This one is mixed to mono using the EMG-81 EQ capture before applying distortion and amp simulation.

Recuerdos de la Alhambra —A classical guitar piece composed in 1896 in Granada by Spanish composer and guitarist Francisco Tárrega performed on a Fender Stratocaster equipped with the Nu multichannel pickups, again with a “classical” EQ capture.

The Nu capsules are easy to use. These are self-contained active pickups. There are three significant pins, a) V+ power (anything from 5v to 18v), b) GND ground, and c) OUT output (signal). The extra pins are redundant connections to GND ground. Here are some basic wiring diagram examples.

The Nu capsule includes reverse polarity protection for the supply pins, so you do not have to worry about damage due to incorrect wiring.

This is the simplest wiring possible for a single pickup. Just connect to any clean power supply, such as a 9v battery and connect the output to your amplifier, mixer or audio interface. The example below makes use of the stereo jack socket ring contacts to switch power. When a mono jack is plugged in, the battery’s negative terminal gets connected to ground, thereby powering the capsule. Power is only applied as long as a plug is inserted. 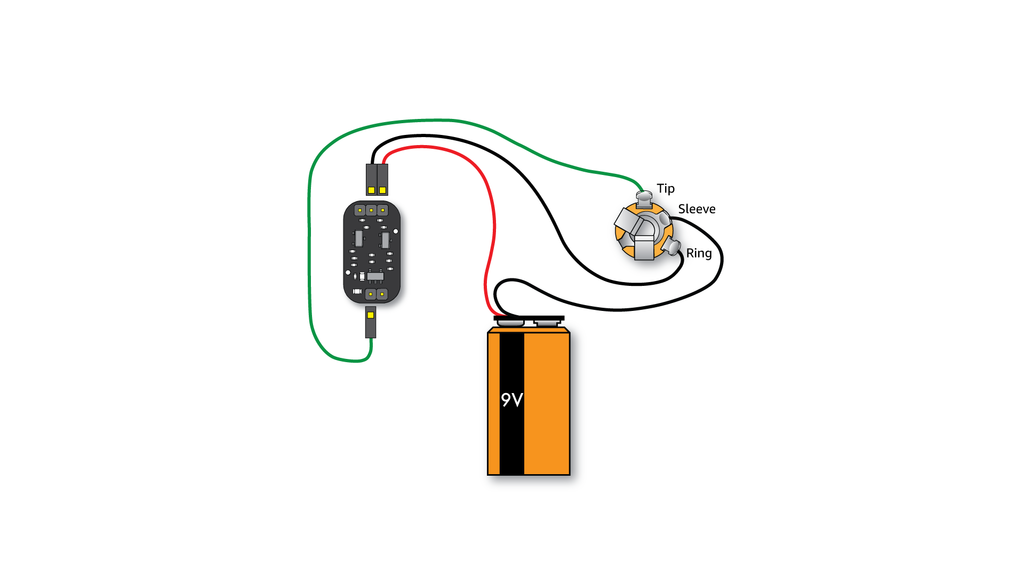 Here’s an example for a quad (4 channel) setup using 4 Nu capsules routed to 2 stereo outputs. Each stereo jack carries the output of two Nu capsules. The Nu capsules are modular. This example can extend to more pickups as needed. 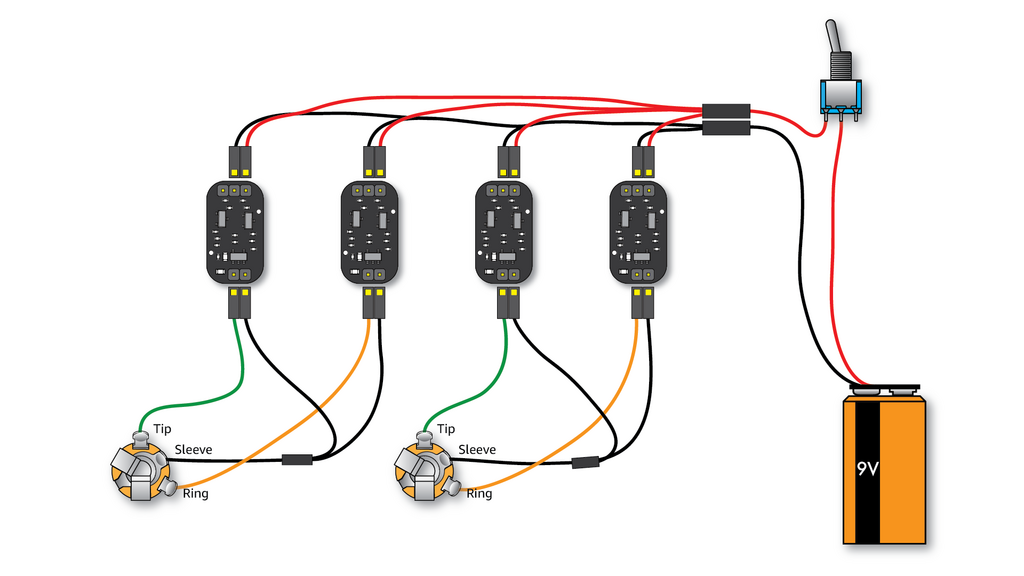 You can passively mix the outputs by adding a 5kΩ to 10kΩ summing resistor to each output. Simply tie all outputs using the summing resistors as presented in the example diagram below. This example mixes the outputs of two capsules to the left channel and the other two to the right channel. The individual resistor values can be adjusted to balance the mix. It may even be possible to have individual pots per input to give you better control.

Take note that this scheme is only recommended for use with musical instrument amplifiers with high input impedance >100kΩ (e.g guitar amplifiers).

Note on mixing: Typically, each output can passively mix 2-3 inputs. It is not advisable to have more than 3 inputs summed together, but 4 inputs might be the maximum, if you really need to. Please be aware that with this simple passive mixing scheme, each additional input will attenuate the signal by the number of channels added and so you might have to add some gain to compensate for the signal loss, but adding gain will also increase the noise. Also, take note that you will introduce cross-talk with such a passive mixing scheme, and it is therefore not possible to have both mixed and individual outputs at the same time. For that matter, it is better to use an active mixer (as opposed to passive). For high-gain applications, mixing the outputs before high gain stages is not advisable. It is better to use a mono pickup if you simply intend to have a mono mix anyway. If you really must mix the outputs before high gain stages, it is essential to incorporate a noise gate or downward expander per channel before mixing the outputs.

Tip: You can adjust the individual capsule levels by choosing suitable mixing resistors. Lower values give stringer outputs. The minimum is around 1kΩ. You can use trimmer resistors for ease of adjustment.

The Nu capsule includes a standard 2-pin and 3-pin 2 mm pitch header connectors for power and signal. Direct soldering or mounting to a corresponding female header to a base PCB is possible. Ideally, the capsules are mounted to a base PCB like that shown in the left image. Alternatively, you can use female header connectors like that shown in the middle image below to connect, solder-free, to the Nu capsules as shown in the right image.  These connectors are fairly easy to get. Check out the links below: 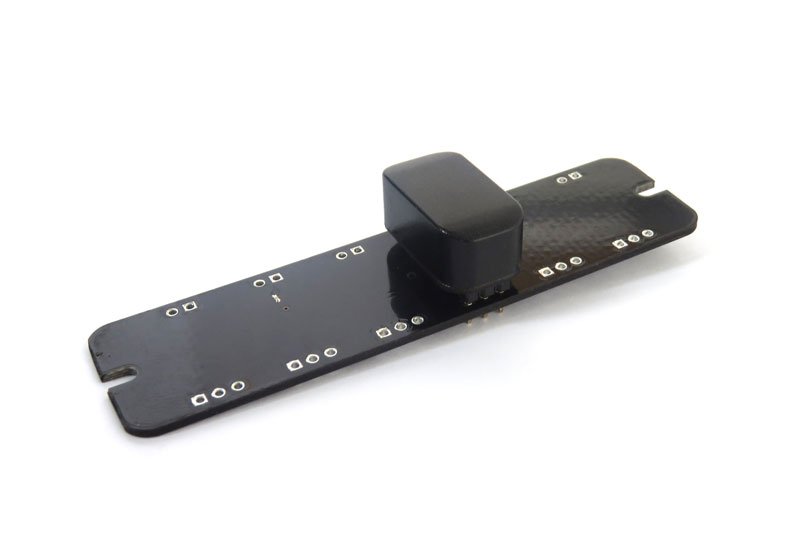 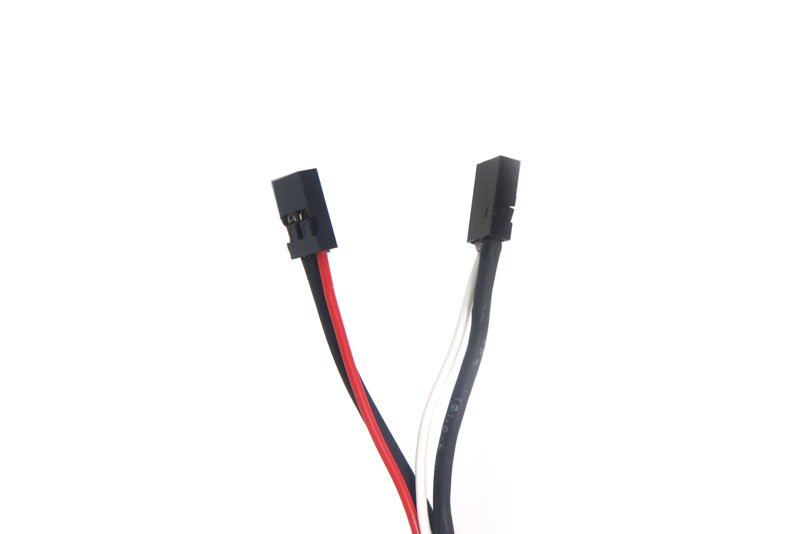 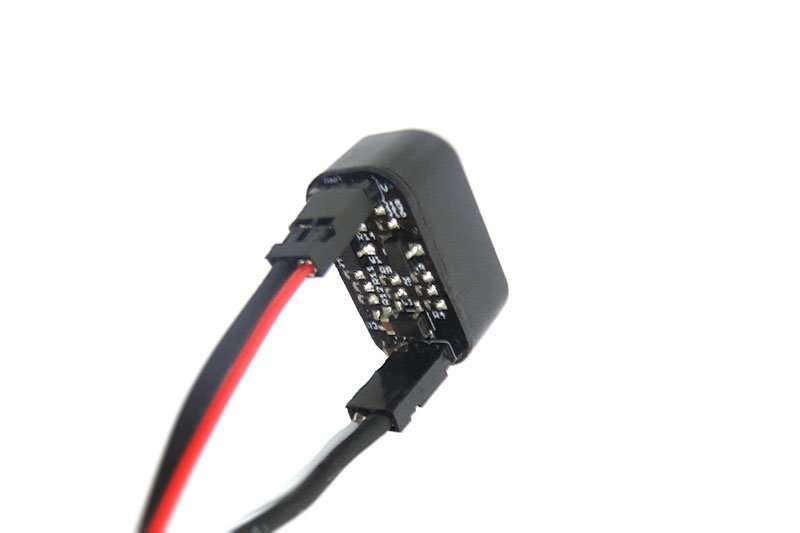 The Nu Multi is a complete multi-channel pickup comprised of multiple Nu Capsules in a form that is easy to install in a standard electric guitar (or electric bass).

The Nexus-GK is a flexible, and hacker friendly breakout box that connects your Nu pickups to the outside world. 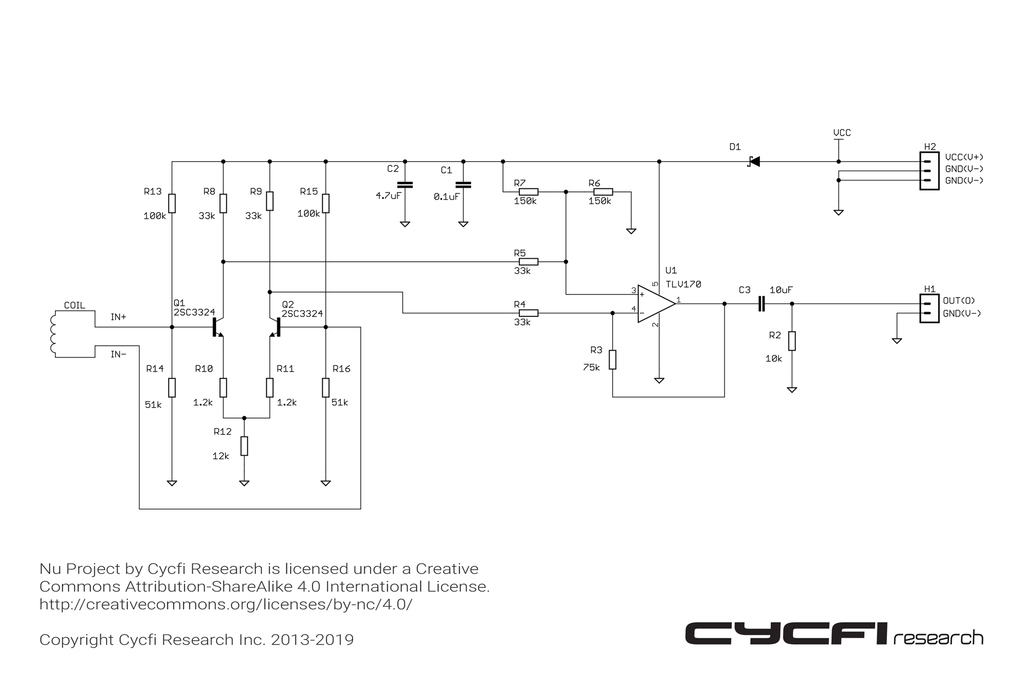 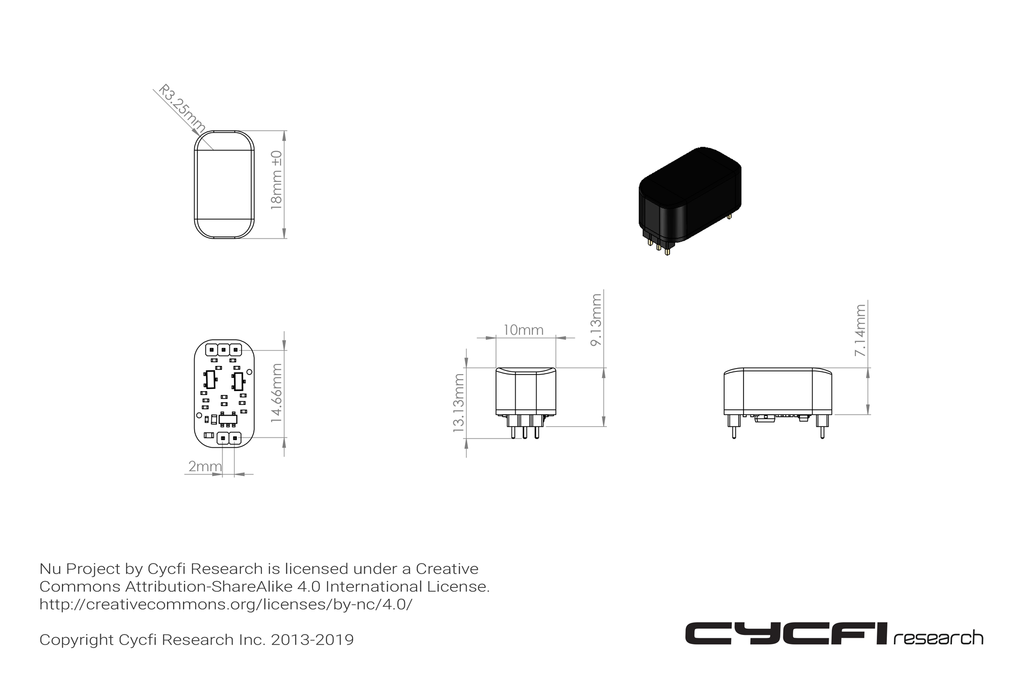 All trademarks and registered trademarks are the property of their respective holders. The use of these trademarks does not imply any affiliation or endorsement by the trademark holders.