Ricky Graham is truly a 21st century guitar player. As a composer and Assistant Professor of Music and Technology at Stevens Institute of Technology, modern 21st century gear such as a multichannel audio interface and a laptop running Pure Data, are a crucial part of his sonic arsenal. This 8-string Nu set will be on its way to Ricky, after hitching a ride to NAMM 2016 along with some of its XR siblings. Go forth and make some music! 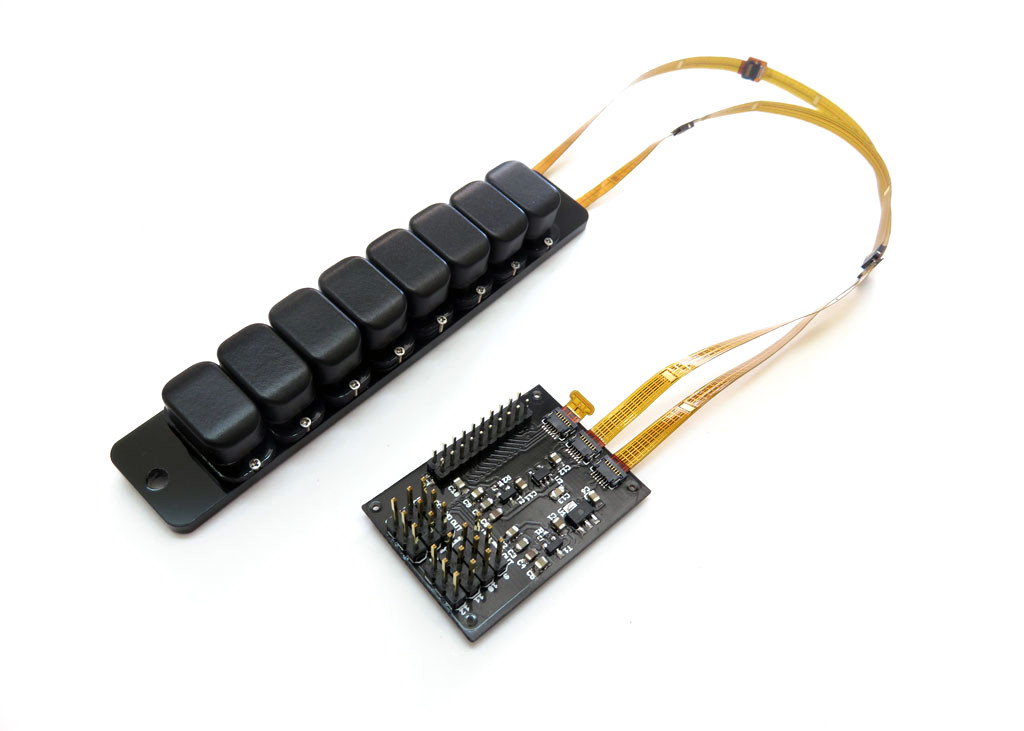 Ricky certainly knows his way around tech! I hope the description and diagram below will suffice, for now (full schematics to come). A single 12v VCC coming from the output pins branches out to two internal power sources. There are two ultra low-noise LDO (low dropout) regulators, plus another two capacitance multipliers for the 9.3v which powers all audio and control voltage inputs, and another 5.4v which powers the Nu. The capacitance multiplier cleans up any remaining noise from the external supply giving you extremely clean power —a must especially when sending the output to extremely high gain stages. That is also the reason for the odd non-exact voltages (9.3v and 5.4v). 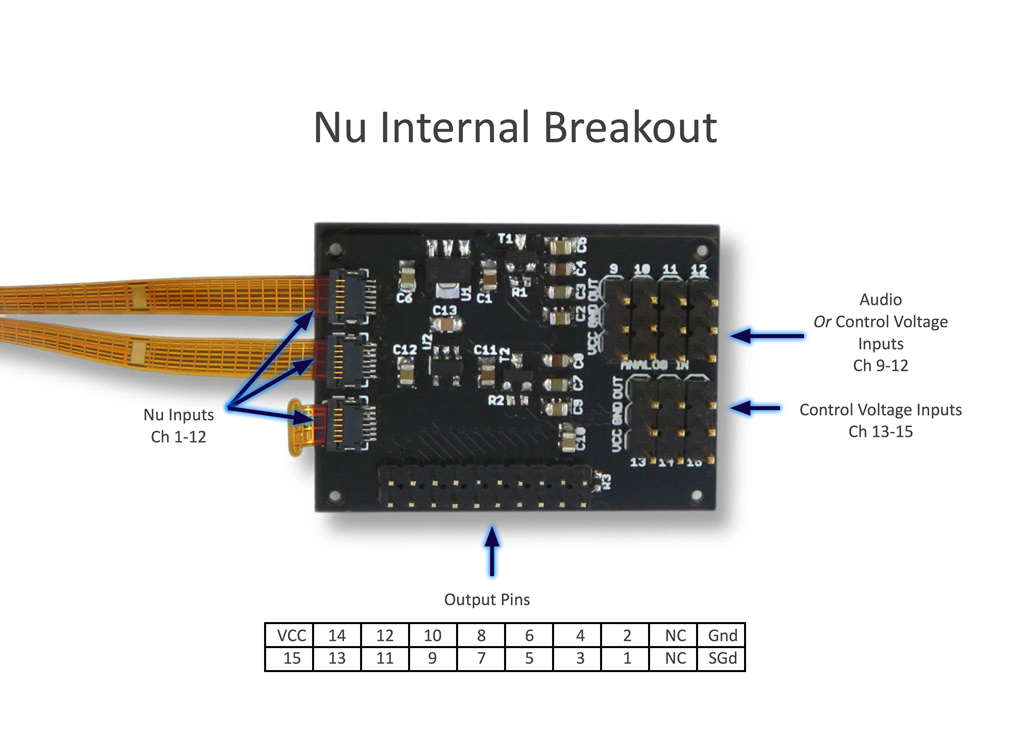 The output pins provide up to 12 channels audio and up to 7 channels of control voltages (CV). Channels 1 to 8 are strictly audio, which may come from either the multichannel Nu or any other active or passive monophonic guitar pickups. Channels 9 to 12 may either be from audio sources or CVs. Channels 14 and 15 are strictly CVs, which provide a variable 0v to 5v voltage source used for external control of various parameters.

Gnd is power ground. SGd is signal ground. Signal ground is separate from power ground, again, to minimize noise. It also provides an asymmetrical balanced line where the signals are transmitted differentially, but only the hot wires carry the signals. Signal ground is arranged to have the same impedance to ground as any of the channels. The receiving end provides N+1 impedance matched input buffers, where N is the number of channels, and the +1 represents one more buffer for signal ground. This extra buffer carries the common mode interference that should also be present in the other lines, with the same magnitude, since the impedances are the same. Subtracting this from all channels should clean up the signals from interference injected through the cables.

Nu sources connect to FPCs (flexible printed circuits) at the left, in groups of 4. Thus, the 8 channels pass through two connectors, while the third is stubbed out. The stub simply shunts unused pins to ground. Audio and CVs connect to 2.54 pitch headers at the right. 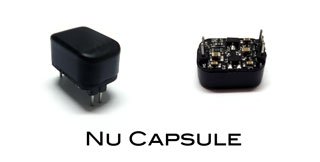 The basic Nu capsule (permalloy shielded pickup and integrated preamplifier), not including the solder-free FPC connectors, will be available by the end of January at $25 per capsule. Be advised that the Nu capsule is intended to be PCB mounted. Soldering required! The Nu capsule includes a 5-pin 2mm pitch header connector that can be directly soldered to a PCB, or mounted to a corresponding female header. If you are not afraid to do some electronics work, this is for you. 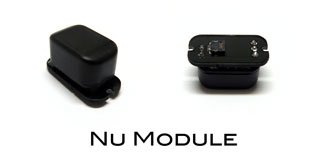 If all goes according to plan, the Nu module (Nu capsule plus mounting base and solder-free FPC connector) will be available in February at $30 per module. The Nu modules mate with the internal breakout (above) which will also be available in February (price TBA). The internal breakout includes a set of FPC cables enough for up to 12 Nu modules. The initial release will be very limited, so please send us a message so we can reserve a set for you.

Note that there’s an implied no-hard-promises there! That’s my escape plan in case yet more issues surface. Having said that, the Nu capsules and modules have been fully tested for over a year now. All technical problems have been addressed and all that remains are non-technical issues such as supply, logistics and distribution.

Aside: I’m a tech person more than anything else. Are you a manufacturer? Or a distributor? Both? Or, do you know anyone in the music industry who might be interested in what we are doing and who share our passion for modern tech applied to musical instruments, especially the guitar and other stringed instruments? We would love to get in touch!

I’m sure someone will ask: how about the Nexus? Well, that too is in the final stage of development, after something like 5 iterations! Right now, we’re testing control voltage to MIDI conversion. There are currently two available CV controllers: a 5-way switch which maps to MIDI patch/program change and a potentiometer which maps to MIDI control change (CCs). Ideally, you want “fly-by-wire” control of volume, patch change and other effects and EQ parameters through MIDI.

I can’t make any promises, but I’m really hoping we can have the Nexus released (on a preorder basis) sooner rather than later; possibly in March. Again, all technical problems have been addressed; what’s remaining are non technical issues such as costing, logistics and supply. One nagging issue is cost.

We use only premium components and it is very difficult to keep the total cost down to something reasonable. I am assuming only a small initial run, but parts suppliers have minimum order requirements (MOQ) that need to be satisfied. The nice LEMO compatible cables alone are rather pricey at $70 each (at cost!). In the end, we might have the Nexus (at least initially) in kit form, only for those tech savvy enough to build something from preassembled printed circuit boards.

You tell me what you want and let us discuss about viability (come join our FB group). It is really hard to pin this down! For some, an expandable all-analog interface, plus MIDI control, is very desirable. The bottom line is that you want access to all multichannel audio. There are those who still prefer to keep it all in the analog domain. Just plug the Nexus into your trusty tube amp and you are good to go. For others, an all digital approach is the way to go. These folks want signals from each string go straight to a computer where all processing takes place. To be honest, I’m in the second group! My initial thought was that the all-analog Nexus is a good starting point. The minimum viable product MVP, if you will. It is turning out that a direct to digital approach is proving to be a more practical approach when it comes to total cost.

The jury is still out. Let me hear your thoughts!