Last time, I posted about the E-Whammy. This time, I will propose alternative solutions and investigate the pros and cons of each approach. The basic idea is that we want to have a controller for pitch bend, without the mechanical problems that plague traditional vibrato mechanisms. Guitar players are quite accustomed to the whammy bar. I find it hard to convince guitar players of the virtues of alternative controllers that can be superior in many ways.

It’s hard to get over tradition, but ask yourself this question: why is the guitar vibrato designed that way? It all started when blues and jazz guitarists produced the vibrato effect by manipulating the guitar tailpiece by rocking it back and forth. Hence it follows naturally that a lever for doing that can be quite useful. And so, the very first mechanical vibrato (the Vibrola) was invented by Doc Kauffman in the 1920s which strongly influenced subsequent development of vibrato mechanisms.

But a controller for changing pitch electronically does not have to have that form. There is no need to move the tailpiece back and forth to achieve vibrato. We are not manipulating string tension. We should be free to go beyond the whammy bar and explore other ideas, perhaps borrowing from other instruments, such as… Here I go again: Synthesizers.

Synthesizers use joysticks to manipulate pitch and modulation, independently, using a 2-axis joystick like that shown at the right. By default, the range is ±2 semitones, but can be configured to have a wider range. The other axis is typically assigned to modulation.

Unlike the whammy, the advantage is that there are two axes of control, instead of one. The feel is different. Synthesists typically use it much like guitar players already do with left-hand pitch bend and vibrato techniques, before the advent of more advanced keyboard controllers with polyphonic after touch and MPE. Giving it a wider range beyond ±2 semitones makes it rather unwieldy to use. 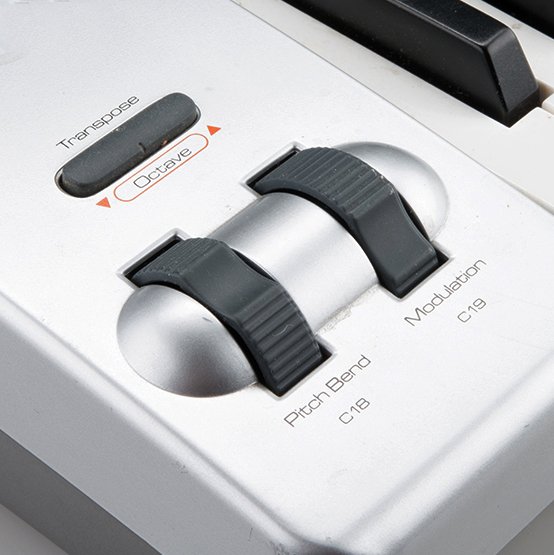 The Bela Trill Bar is a one-axis multi-touch slider, capable of detecting up to five simultaneous touches as well as touch sizes. With this level of control, this device can do much more than what the ribbon controller can do. Being able to detect touch sizes gives it another axis of control that can be assigned, for example, to modulation. And the multitouch capabilities is astonishing. What can you do with five simultaneous touches? A lot! I can’t even begin to grasp what can be done with this controller! But do tell me what you think!

Here’s a low-hanging-fruit idea I’ve been mulling over recently. Consider a rigid, flat surface, perhaps using carbon fiber. Attach two force-sensing resistors (FSRs) at the back on each side of the surface. The dual FSRs are then connected to a power source and ground, with the middle connected, thereby both FSRs will act like a single potentiometer. Such an arrangement inherently returns to zero when not touched. It is simple to implement and be quite effective and responsive:

Not Just for Pitch Bend

Like most guitar players, I’m already accustomed to using the whammy bar. But, I can imagine the possibilities permitted by the extended precision of a touch bar. For that matter, I’d probably gravitate towards a touch-pad for pitch bend. One might say: why would you want the guitar to be a trombone? My answer is: why not?

Of course, the bottom-line is that it’s always a matter of preference. Nevertheless, obviously, these controllers are not limited to controlling pitch-bend only. These controllers can indeed be used for other purposes. Each player may have their own preference. I certainly have mine.

In the end, this post should probably be titled “Alternative Controllers”. But a gentle clickbait wouldn’t hurt 😉

Do you have alternative controllers in mind? Tell me what you think!

Great post again! You probably know that but there has been some stuff on this space (of course, not polyphonic): the Rob o Reilly MIDI guitar and the multiple Kaoss Pad guitar builds come to mind. What do you think of those?

My general comment about XY pads is the size. They’re too big. Moreover, because of the size, they are out of place. I’d prefer multiple 1D touch-pads.

Why not use something like “CapSensor” from the project “theremino.com” ???