This is the second part of a 2-part series. The first part is Thor: Sonic Envelopes. Have a read, if you haven’t done so yet. Previously, we introduced a few sound samples with clean sounds morphed using various means into truly unique sustaining harmonic textures. This time, we will investigate polyphonic distortion. Electric guitar players are accustomed to the sound of the distorted guitar. It is the essence of rock and roll.

With multichannel sustain, the first purpose is already satisfied. The second purpose, timbre modification, can be done using other means, as demonstrated previously. So, with multichannel processing, distortion, as a tool for transforming timbre, is no longer strictly necessary. Moreover, distortion, by means of pushing the signal to saturation, is just one means, among many, for what’s generally termed as waveshaping.

Traditional distortion has some undesirable consequences. By pushing the gain, you also increase noise. For multichannel systems, such as Thor, you also increase crosstalk levels. Without mitigating these unwanted side effects, you can end up with an unusable mess. Hence, with the Ascend project, there are multiple components that contribute to alleviating these drawbacks. For example, Ascend VPU already has an extremely effective noise-reduction feature (this will be decoupled into an independent plugin soon). Also, in the works is a promising technology for minimizing crosstalk. In the meantime, Ascend VPU also has a downward expander for each channel that can be used to attenuate unwanted crosstalk. Set at a suitable threshold, the downward expander is sufficiently effective.

Like in the previous installment, each audio sample is recorded using only the Thor Infinity guitar. There are no other instruments. No synths, no drums, no bass. There are no overdubs, although there are a few takes and comps here and there.

Let’s start with the E5 power chord on all strings:

The high 4 strings are duplicates. Let’s have a listen:

In this example, I used Bias FX plugin with a Tube Screamer and a ’92 Threadplate, fed by the Ascend VPU, with the Strat (Dimarzio Area 67) Neck Position preset, on each channel.

All together, all 6 strings. The sustaining strings evolve in very interesting ways. The strings resonate and influence each other with an interplay of common harmonics.

Now, we enhance low E string and A string with an octave down pitch shifter, Logic-Pro’s AutoFilter and SubBass enhancer, on the low-E and low-A channels. I fade-out the A string channel almost after attack to give emphasis to the low-E.

Step modulation applied to each channel, while the strings are continuously sustaining, can generate impressive sequenced patterns and arpeggios. In this sound clip, I am using Logic Pro’s Step FX: a powerful multi-effect unit that provides deep modulation control with three independent step modulators. We apply various settings for each channel to sequence some interesting patterns. Here’s the setting for the Low-E, for example: 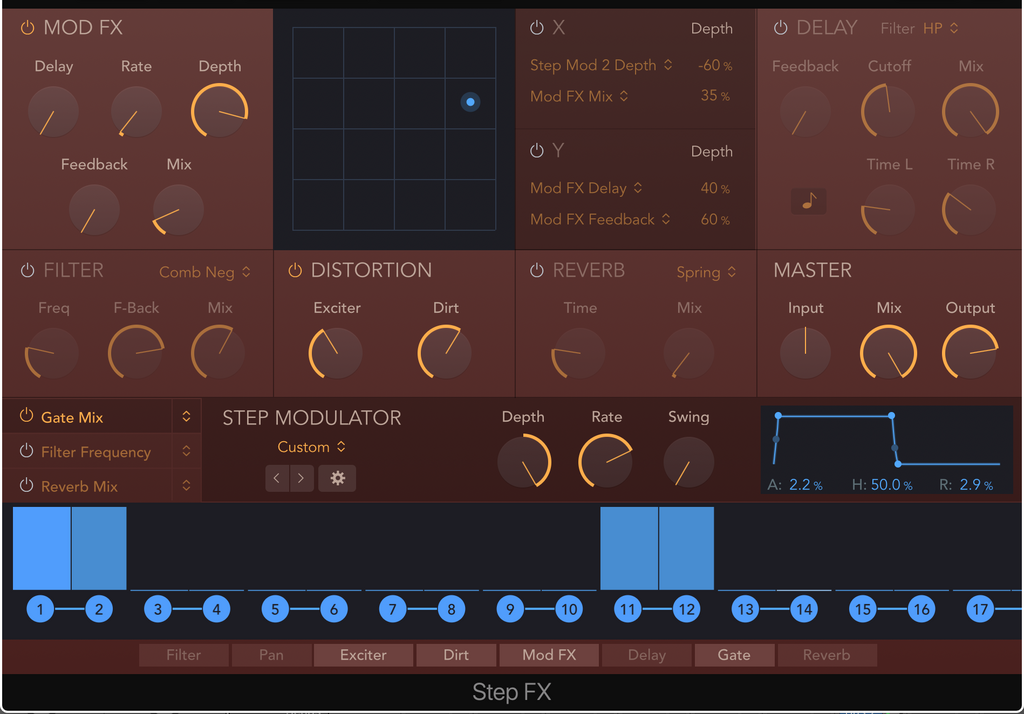 Strum a chord and the Step modulator will arpeggiate the notes for you. You can add notes, or mute notes, anytime. The sustained notes will continuously feed the arpeggiator. Playing the guitar this way is very satisfying!

This one demonstrates double and triple stops, right-hand note taps, left and right-hand slides, and tap harmonics. For distortion, we have Ascend VPU on each channel with the Strat (Dimarzio Area 67) Neck Position patch, Logic Pro’s Pedal Board on strings E4, B3, G3 and D3 with Grinder + Graphic EQ. Bias FX is used on strings A2 and E2, each with a (Tube) Screamer and ’92 Treadplate. We use Logic Pro’s Enveloper with 200ms attack only on the E4, B3, G3 strings.

The Low A and Low E strings split to a bus with an octave down pitch shift and SubBass enhancer. This will come in near the end at 0:44.

I tried using various cab sims for the poly-mix. In the end,  I chose to simply EQ the mix with cutoff around 2-6 kHz. I don’t know… I find cab sims for poly-distortion sucking too much of the tone. I find simple EQ gives a much livelier, harmonically rich result. The result is always silky smooth, no matter how you cut it. It’s like a cross between a synth and an over driven guitar.

When doing double and triple-stops, I really desire for a whammy bar or a ribbon controller, for applying vibrato to all sustaining strings. I’d list this as another extended goal.

Doing this audio demo got me thinking about having individual mutes for each string in the guitar. Perhaps tact switches for enabling/disabling sustain for each string might be a good idea. I’d list this as another extended goal.

Woodstock, August 1969. Jimi Hendrix performed Star Spangled Banner: The anthem of a generation. This is probably the best early example of a performance utilizing prodigious amounts of guitar feedback. It was something entirely out of this world.

It makes me chuckle every time I see the player struggle with feedback and failing to hold the note, and sustain ends prematurely. I could fix that, I thought to myself. Envisioning the Infinity project, in the early days, I often wondered about well-behaved feedback laden rendition of Star Spangled Banner without the limitations of brute-force feedback. I also often dreamed about a polyphonic (or at least duo-phonic,) rendition of the piece.

I had quite a bit of fun producing these short audio clips. Pardon the cliché, but really, I am just scratching the surface of what’s possible with this system. Infinite multichannel sustain, plus multichannel processing, is a door to an entirely new realm of possibilities! At long last, I am starting to realize the sounds I had been dreaming of in the past decade, while developing the Infinity project.

While making the audio samples, (and I am glad I did it myself, instead of delegating it to someone else), ideas on how to improve upon the system, both hardware and software, keep on pouring in. So, there’s still a lot of work to do, especially with digital signal processing, but I can confidently say that the current system is already extremely very usable, and I am extremely pleased. It’s just the engineer in me incessantly telling me how things can be improved.

beautiful! thank you! I find fundamental as you pointed out to the guitarplayer that sustain and overtones are not necessarily connected. my distortion can adapt the original envelope to avoid change in dynamics when adding overtones. on the other hand I love to compress before the clipping to control the amount of clipping and create soft overtones.
I suspect that for many of us a melody different from the anthem would be easier to digest and appreciate as something new without comparing to master Hendrix 😉

Thank you, Matthias. No worries, many more to come as I learn more poly-sustain techniques.