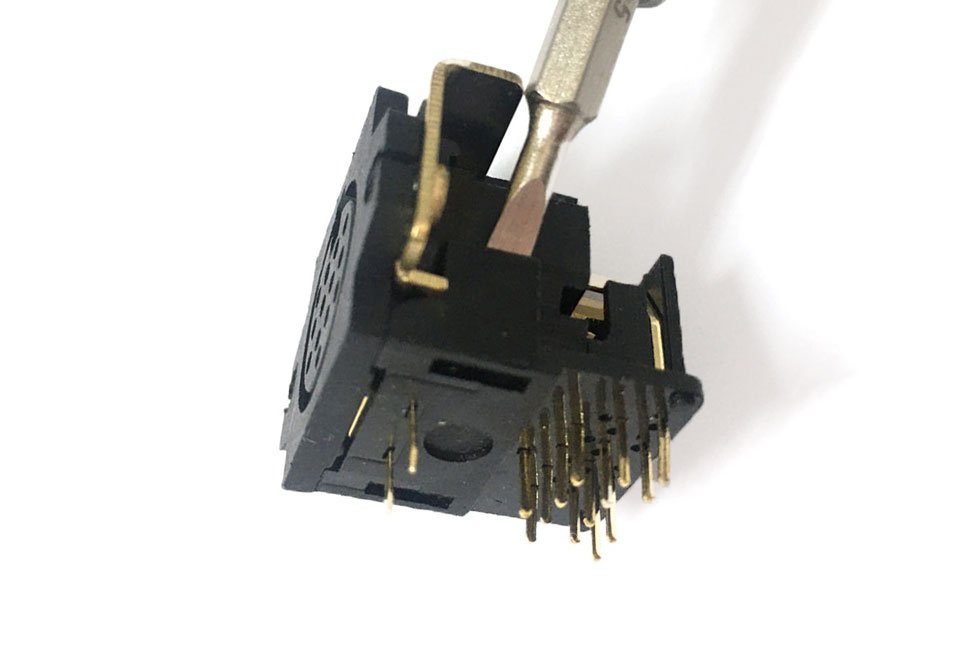 So, recently I got some connectors from our Spicetone friends. I claimed that this is the best choice (or at least a suitable choice), but there were some criticisms about it, especially from Synquanon. And so the burden of proof is on me.

What do I do? As an engineer, my first step is to take it apart and investigate. I love taking things apart! Haha :-).

Bear in mind that for my purpose, I am focused on one particular use-case: using it as a secondary connector for connectivity to Roland gear. My main connector will still be the more robust LEMO 19-pin.

Dissection time! First time, I managed to destroy one. The second time, I discovered that there’s a plastic latch that you can pry open with a small screw-driver. After that, everything came apart easily:

Take note of the one I encircled in red in the bottom right picture. I’ll get back to that later…

The metal plate is also gold-plated. There is a slot at the top where the plug is supposed to latch to. Here’s a close-up, picture at the right, with the latch encircled in red.

At least that’s how I think it is supposed to do. However, it seems there’s either a design or manufacturing issue with this connector type: the jack does not go all the way through. After some investigation, I realized the problem is with the contacts: the one I encircled in red in the 4th image at the top (zoomed here at the left). The contact is not deep enough to let the jack’s pins all the way through.

Because of that flaw, this connector does not lock. The latch can’t catch on. My initial thought was that this is not acceptable. However, I think Rein Sabolotny (Spicetone) makes a solid case: if the plug’s locking part is not reaching the locking hole in the connector, then it is depressed against the large metal plate like a spring. It may be that this way it even gets better ground contact than when it is reaching the locking hole. And indeed it is. because of this, there are actually two contact points to ground. Picture below-right, ground contacts in red, each pushing against the Jack’s shell:

But still, it does not lock! And yes, I thought… Again Rein has a compelling argument: Think about conventional guitarists. They try to lock the cable on the guitar side, but they never do that on the amplifier side, as that is a risk for their (in most cases very expensive) amplifiers. You better lose your connection than take off your expensive equipment. I think that is a general tendency. There is no locking with HDMI, USB and whatever (nowadays) cables you connect to your laptop. Because you do not want to harm your (expensive) laptop. Agreed? And going further, there’s also MagSafe (The connector is held in place magnetically so that if it is tugged — for example, by someone tripping over the cord — it will pull out of the socket without damaging the connector or the computer power socket, and without pulling the computer off the surface on which it is located).

So I think the bottom line is how tight the connection is. Is it loose? So I did a quick test measuring the required pulling force for some connector types. Here’s what I got:

So here, I think it is not really that bad, come to think of it: The Nexus gets connected to some Roland gear, from its back panel where there is almost no movement and disturbance at all.

I think the bad rap started with the initial experience with Spicetone’s connector, confusingly oriented upside down. Normally, you have the latch at the top. Synquanon says he was able to insert the jack upside down. That can be scary indeed!

But I’m not sure what happened. I tried, but I was not able to force the jack through upside-down. The jack’s latch gets in the way (image at the right). Was it a case of bad luck? I’m not sure. But thinking further, what are the consequences if that happens? And, after some analysis, I came to the conclusion that nothing bad will happen, actually. Here’s why: in the case of the Nexus, when the GK-13 gets connected upside down, the +ve power rail gets connected to the signal lines which are capacitively coupled, so the potentially harmful DC will simply be blocked. The -ve power rail will not get connected at all. Ground, well ground will still be ground.

So what do you think? I particularly like this jack because 1) It is gold-plated 2) It is well-made and sturdy enough at least as a secondary connector. 3) Oh and one more thing: in the standpoint of manufacturing, it is PCB mounted, through-hole.

Is this a thorough enough investigation? Are my conclusions reasonable? Is there something else I am missing? Let me know your thoughts…