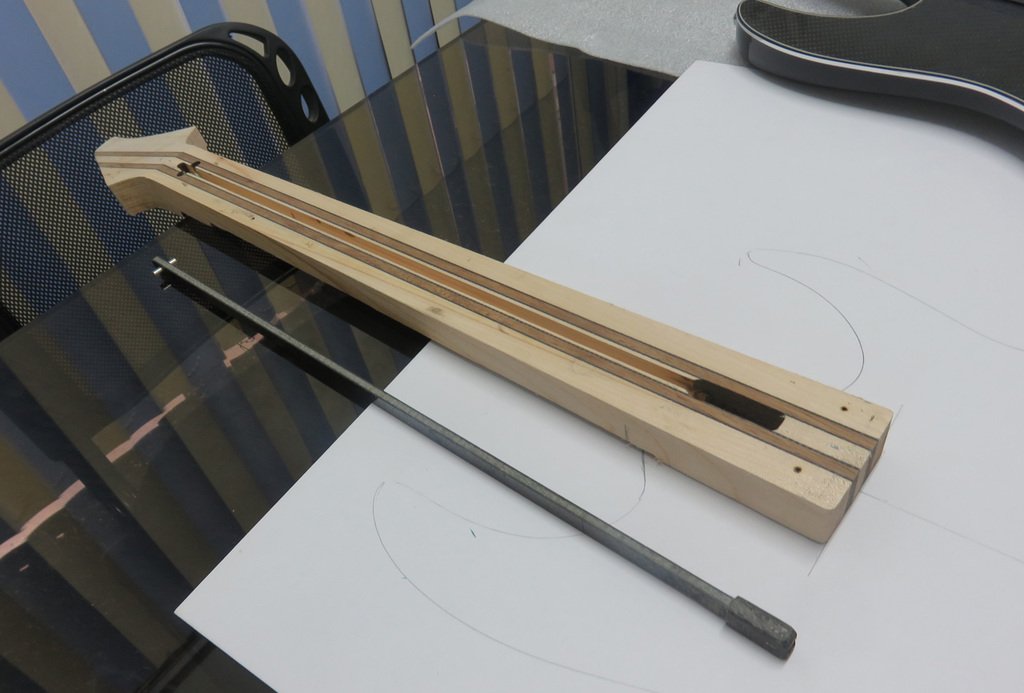 I owe Just Dominik some CAD drawings. He asked me if I can share the Alpha designs. It’s a Neck-Through design using Bamboo and Carbon-Fiber. And so, I’ve had a chance to think about it again after 10 years(!) since it was conceptualised. I thought maybe it’s time for a follow up to this concept guitar.

It’s time for Beta. Like Alpha, Beta will probably remain a concept guitar that I can play around with, as a testing ground for some more innovations, esp. the Infinity project. Unlike Alpha, it will be made from various hardwoods and Carbon Fiber. I’ve had misgivings about using Bamboo. It’s just too darned difficult to work with and manufacture! Wood is so much more easier. On the other hand, wood is not as sustainable as Bamboo, and some types of wood are in the endangered list already.

It’s not settled yet. I haven’t made my decision on what’s really best to use. But for now, since I do not intend to produce in some quantity anyway, at least not at this point (maybe a few in the future, or maybe in collaboration with one of my luthier friends…), Beta shall be:

Here are some pictures of the Neck in the making:

As for the fretboard, I really wanted to use an extremely dense and hard dark-brown/black exotic hardwood called “Kamagong”, which is ⁠related to ebony:

A have a small stash good for a few necks, obtained more than a decade ago. Alas!, Kamagong is an endangered tree species and protected by law, so I might end up not using it after all :-(.

It’s not (yet?) listed in the CITES list of Restricted and Endangered Wood Species as far as I can tell (In case you don’t know, CITES is the Convention on International Trade in Endangered Species of Wild Fauna and Flora). And even if it is, there are exceptions. This Reverb article about restrictions on Rosewood, as an example, states that a CITES exception applies to instruments personal use while traveling internationally (unless they contain more than 22 lbs. (10 kg) of the regulated woods). I did not know that any kind of rosewood and certain types of bubinga are restricted. Did you?

But although Kamagong is not listed in the CITES list, it is indeed restricted locally, probably with some exceptions, I need to research. This Wikipedia article (Diospyros discolor) states that it can be “exported provided that they are properly documented and approved by the Customs authorities”.

But I suppose it is better to be safe, and environmentally correct.

Tell me what you think! Should I stick to Bamboo + Carbon Fiber? Or perhaps Bamboo plus Maple and some other non-endangered hardwood such as Adaan + Carbon Fiber? Leave a comment here or in our FB forum.