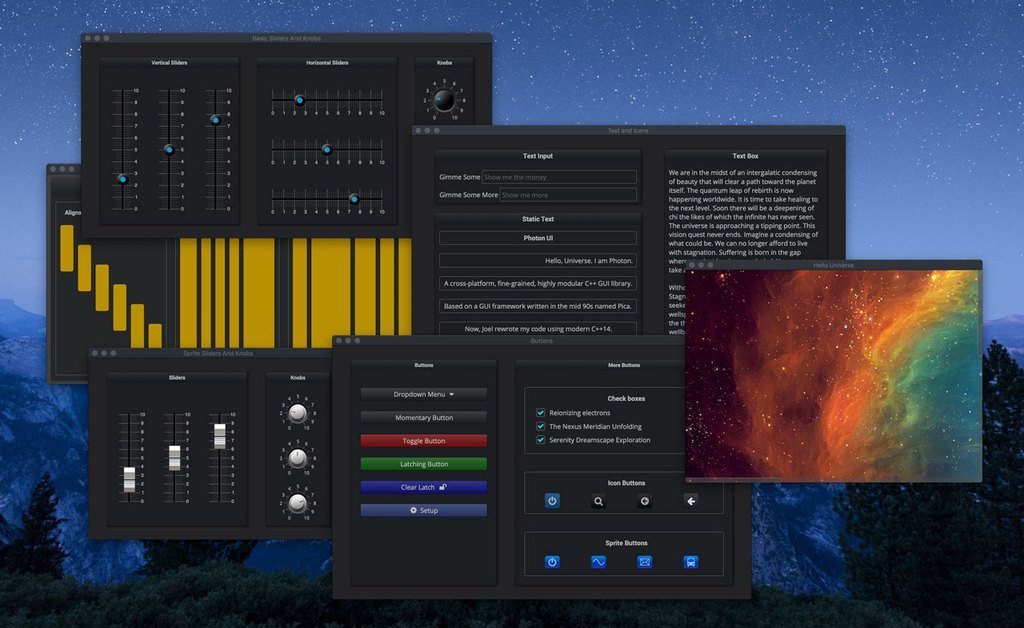 Update: Renamed the library to avoid the name Clash with QNX Photon.

Let me tell you a bit about Elements… From my previous post about Ascend, some folks noticed its existence and actually found the github repository. The repository is rather underwhelming, I thought to myself, devoid of any documentation of any sort, other than a very terse description: “Photon Micro GUI library” (previous name). I figured perhaps it’s good to post preliminary information about it, maybe starting with some history and basic architecture and design principles and code snippets. Just enough to give it a bit of justice that it deserves.

It’s always a good idea to start with some pretty pictures:

Perfect is the enemy of the good, but I just can’t resist it!

Sometime in 2014, I started searching for a GUI library I can use for some of the projects I am developing. The most important requirements to me were:

There are other requirements, such as not relying on a “visual” GUI editor or code generator. IMO, the GUI should be declared in the code. Obviously, good design and architecture is also another requirement. Most GUI C++ libraries are just too 90s for me to consider. None of that crappy OOP bleh! But, hey, I am digressing! The truth is, I am even willing to use a library with a pure C interface, such as GLFW, as long as it is well designed (GLFW is simple and clean) and can be wrapped in C++ anyway. I also tried to use NanoVG — not really a GUI library, but it makes it easier to write one (NanoVG inspired Elements’ Cairo based vector graphics canvas).

I know that perfect is the enemy of the good, but I just can’t resist it. I couldn’t stand it anymore. So at around 2016, I decided to write my own. Actually, I did not start from scratch. I had a head start: I’ve been writing GUI libraries since the 90s. One of the main projects I got involved with when I was working in Japan in the 90s was a lightweight GUI library named Pica. So I went ahead, dusted off the old code and rewrote it from the ground up using modern C++.

The client uses the gallery code above like this:

Which gives you this:

Some quick highlights, beyond the obvious:

Modularity and reuse are two of the most important design aspects. For example, the button element is actually composed of even smaller elements. Here’s part of the code responsible for making the buttons above (also in the gallery):

After a while, code reuse, using a palette of fine-grained elements, becomes very familiar and intuitive, much like using HTML. The declarative C++ code tells you what rather than how (imperative).

And, as promised, the elements are very fine grained. Here’s the actual button class we are using here:

The layered button is a type of button that basically has two states: pushed and un-pushed. It does not know how to draw the two states. Rather, it delegates the states to two elements, composed as a 2-layer composite element, using the deck element. The class itself has nothing more than a single(!) member variable _state. That’s it! And talking about flexibility, the deck is generic and may contain any kind of element, or even your own custom drawable element. Here’s an example of a custom element that draws an infinitely resizable filled round-rectangle:

Elements has its own HTML5 inspired canvas drawing engine using Cairo underneath.

There’s obviously still a lot to cover, but for now, this quick tour of Elements should suffice. Is it ready yet? Is it usable? Well, I am already using it, at least for the MacOS, which is my preferred development system. I am using it in the Ascend project. But, I have to be honest. While it is usable, and based on very solid architecture and design, there is still a lot of work to do. First, the Windows and Linux ports are currently in an unusable state due to recent low-level refactoring. And, apart from this brief introduction, there’s no documentation whatsoever.

And so that being said, if anyone out there, familiar with modern C++ (esp. C++14 and C++17), finds this brief introduction compelling enough, I would very much welcome some help. Hey, this is Open Source. The license will remain permissive and liberal (currently MIT). Send me an email! joel-at-cycfi-dot-com.