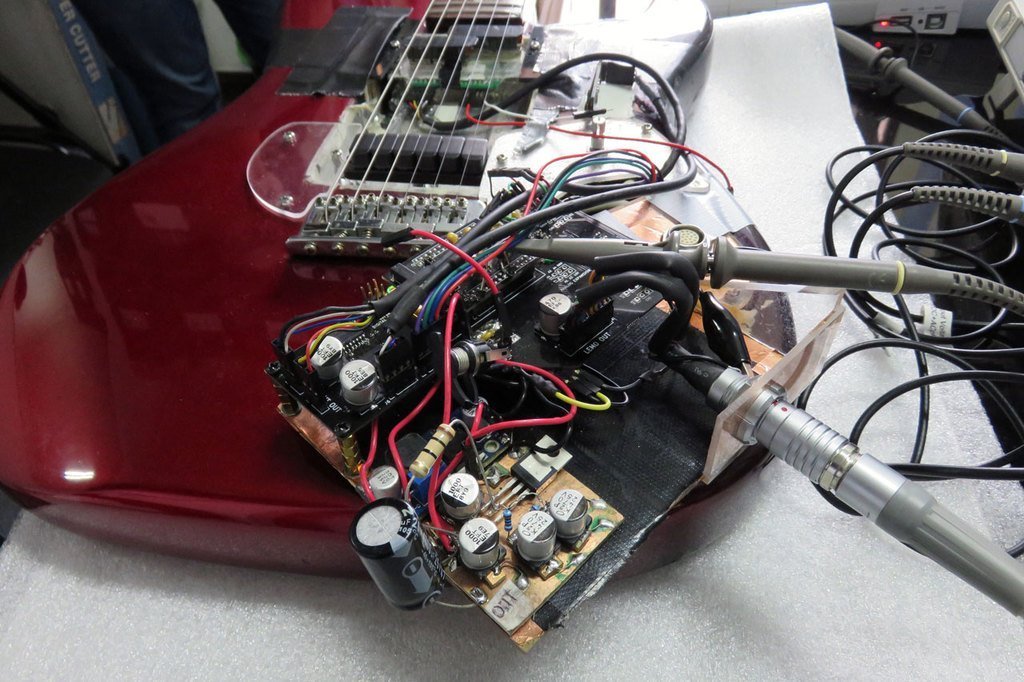 The Infinity project is my holy grail. If you just tuned in recently, you might ask what is that? Well, In a nutshell: “Polyphonic sustain, plus extensive processing for each string, will give us musicians full control over the dynamics of the guitar”.

Like in many engineering project, from concept to implementation, requirements kept changing and is still changing. It is an ambitious project that includes both hardware and software development efforts. Now, it makes sense to separate the hardware part (which still includes software for the drivers). The hardware part will keep the name “Infinity“. But the software part will be renamed “Ascend” (more on that hopefully soon!). Both are still in development, but now I am happy to say that we reached a milestone with the Infinity hardware. We are now in the home stretch!

Nonetheless, I am elated to say that we’ve overcome the last major hurdle: power management and EMI and noise minimization. Both of these are f*kin’ hard! Power management is so easy to overlook, under-appreciate and underestimate. That, and EMI noise, and the requirement that I have to send all the power, both for analog and digital electronics, through a single power line over a multi-pin cable that also carries extremely noise-sensitive analog signals, is, shall I modestly say, not a walk in the park. I had to invent some elaborate schemes to keep the analog section noise free. And you won’t believe what kind of nasty signals go through those power lines if you have both power hungry electronics (the driver coils) and noisy digital (the microcontroller). And not to mention that for efficiency, I had to use an internal buck converter to step down from a single 18v (also a switch-mode power supply). D.C. is never pure 0Hz! I had to clean up the power lines — any noise in there can couple capacitively with the signal lines. We had to listen to the signal lines with a pre-gain of 100x, using a spectrum analyzer, to make sure all audio channels are as close to pristine clean as possible.

I normally don’t post developmental pictures, but here are some for fun, and to immortalize the milestone for posterity.

Messy! The bulky prototype will be replaced by a single clean PCB mounted inside the guitar. Do I hear 4-layers?

Playing this Iron Man beast is simply exhilarating! Often times, I end up losing myself with all the expressivity. It’s an entirely new instrument, I should say, with new playing techniques that require exploration.

A simplified interface with a small OLED display plus a single rotary encoder takes care of all the user interface. Keep it simple! The Nucleo development board containing a 32-bit MCU (STM32F4) performs all the Digital Signal Processing (DSP) using our Q DSP library.

A box full of prototype Coils —revisions over the years!:

From 2014, we experimented on a variety of coil configurations, finally settling on what we have now: a dual coil driver, like the one below: