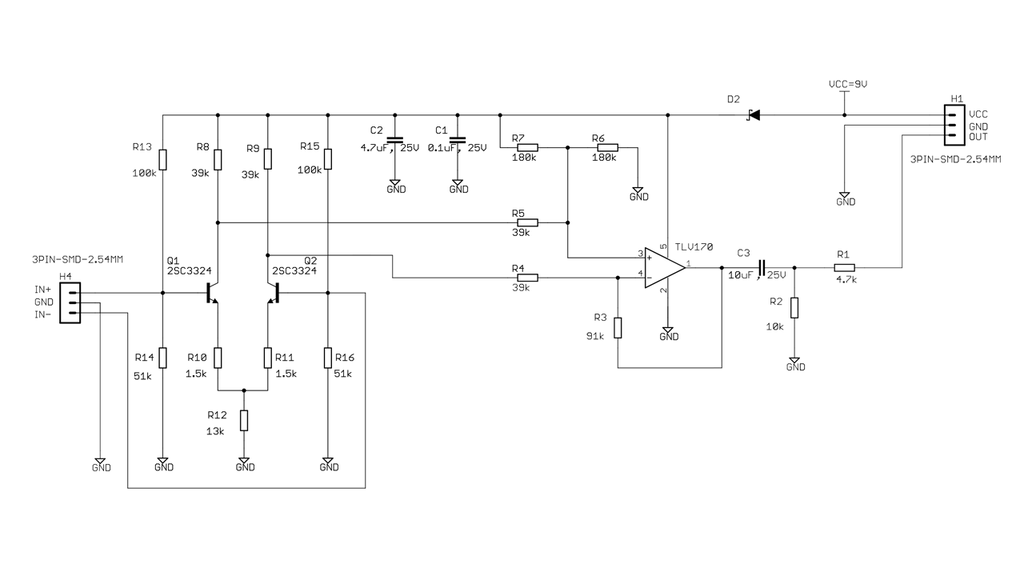 I can’t recall how many times we went back to the drawing board. Design, test, rinse repeat. I only wish turnaround time is shorter than it is now. After initial design, planning, and breadboarding, we start off with dead bug prototyping and do a barrage of tests to validate the design. Then, we do PCB layout using Eagle CAD (although we might be switching to KiCAD soon) and send the design to PCB manufacturing. A cycle takes around 1 to 2 weeks depending on complexity. PCB layout itself can be a demanding task, especially if space constrained, like the Modula preamplifier. What’s painful is when you are in the final stages, and there’s that yet one more test that breaks to design! It happens! And it happened again with the Modula preamp.

I decided early on that the goal is to have a very low noise differential amplifier design, rail-to-rail, with a gain of around 20 to 30, and can run from 5v to 18v or more. It should be transparent, without any coloration. And it should not consume a lot of power. My target was a quiescent current of around 500uA. Later in the design stage, I settled on a single Op Amp differential preamplifier using a very low noise Op Amp (the ADA4084). I used a single-supply differential Op Amp design not unlike that used in the EMG81, but with higher gain, and therefore requiring lower noise. The EMG81 uses the LM4250, a rather old design with 25nV/√Hz. Not quite low noise, but the EMG81 only required a gain of 3. We had to do so much better with our preamp with its more demanding gain requirement.

The Neo (the precursor to the Nu) uses a differential preamp. The Nu (and the XR), on the other hand, switched to a discrete single-ended preamp. Based on our tests, it turns out that both work quite well in terms of noise. With the Neo, however, I had to use quite expensive Op Amps to get the same level of broadband (hiss) SNR. Anything more than 3 nV/√Hz produces too much hiss at extremely high gain. Keep in mind that the preamp sits before high gain stages (distortion, overdrives, etc.).

The ADA4084 was perfect for such a task as our initial tests reveal! Everything was looking good until… well, until we tested multiple pickup coils in series (8 coils in all!). The standard differential amplifier’s input impedance was loading the coils and there was significant signal dropout starting from 4 coils. We needed to raise the input impedance, but increasing the input resistors also increases the noise! Not good! For starters, a 1KΩ resistor has an intrinsic noise of 4nV/√Hz. Each coil is around 500Ω.

I realized we either needed an instrumentation amplifier configuration, or go discrete. An instrumentation amplifier requires three Op Amps in the standard configuration, although there’s a version using only two Op Amps. Such a configuration will require at least two very low noise Op Amps and will double the supply current. I decided to go hybrid with a two-stage design. In the schematic above, the first stage is a BJT differential amplifier (the so-called “Long Tailed Pair“) using the very low noise Toshiba 2SC3324 (0.2dB (typ.), 3dB (max) ). My favorite BJT transistor for audio! The same transistor we use use in the XR series preamplifier. The first stage has a gain of 13. The limitations of the first stage, such as poor dynamic range and usable, but mediocre CMMR and PSSR are drastically improved in the second Op Amp stage. The second stage also provides rail-to-rail output drive, with a gain of 2, for a total gain of 26.

The noise requirement for the second stage is also significantly reduced. Hence the TLV170, a modern (2016) “microPower” Op Amp I discovered just recently, is more than adequate for the task. The TLVx170 family of electromagnetic interference (EMI)-hardened, low-noise Op Amps feature a THD+N of 0.0002% at 1 kHz with the ability to operate on supplies ranging from 2.7 V (±1.35 V) to 36 V (±18 V) with rail-to-rail output. These features, along with sufficiently low noise (22 nV/√Hz) and very high PSRR, make them suitable for use in microvolt-level signal amplification. The TLVx170 family of devices also offer good offset, drift, and bandwidth with low (125uA) quiescent current. Oh and about bandwidth: Notice that everything, except the output, is DC coupled. The low cutoff frequency is 1.5Hz and remains flat up to 100kHz and beyond.

So there! Hopefully this is the final design. Can we do better? Feedback welcome! Come join our forum if you haven’t done so yet.