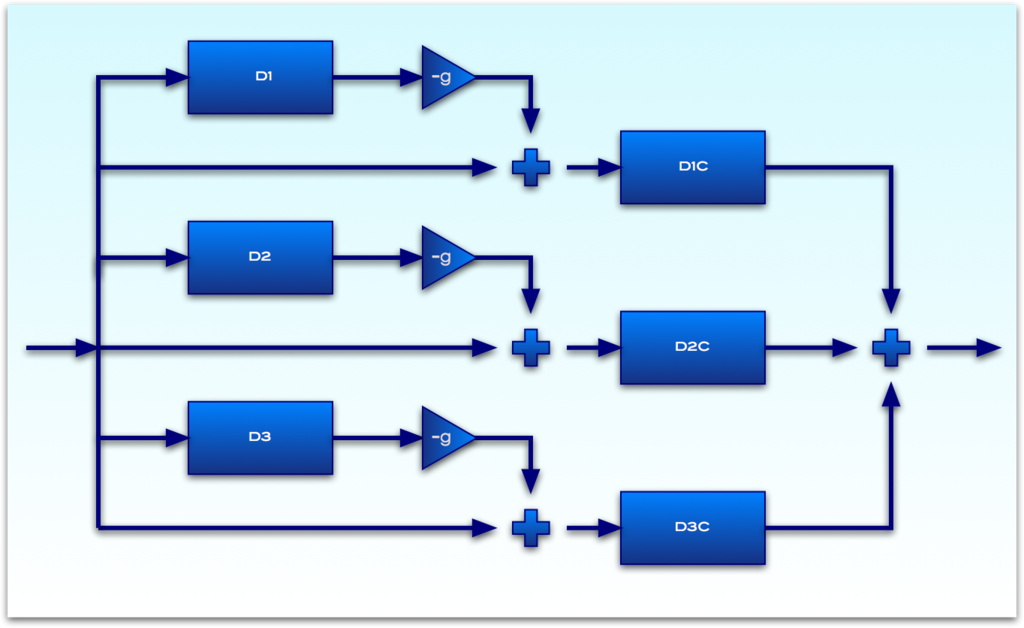 Last week, I stated that given a multichannel pickup with a wide and flat frequency response such as the Neo, it is possible to reproduce the frequency response of various pickup positions (bridge, neck, middle —anywhere from the nut to the bridge) without actually moving the pickup. But we can do better! We can actually emulate multiple pickups using multiple comb filters. Scroll down for some sound clips!

To be clear, I am not aiming for emulation of specific guitars (On Emulation, July 2013). I want to use emulation only as a starting point so the user will have something familiar to start with. Once that is established, we can move on to explore entirely new tonal palette —timbres we’ve never heard before. It’s just one of the filtering possibilities, and one that we guitar players are familiar with.

Again, if you want to learn the math, read the splendid article by J. Donald Tillman: Response Effects of Guitar Pickup Position and Width. I am using that as reference in this article.

Delay lines and comb filters are quite powerful beasts. They are the fundamental building blocks of Waveguide and Karplus-Strong Synthesis, which we’ll explore in the future. To give you a hint, we’ll be combining processing and direct manipulation of sound together with synthesis.

I particularly like the neck plus middle pickups on a Strat or Super-strat (e.g. SSS, HSH), especially when playing clean. I love the glassy, chime-like timbre. It’s the interaction between the two pickups that gives it its nice flavour (it is well known that this switch setting was discovered by accident). Here’s the computed frequency response of the neck plus middle pickup on the Strat. This graph was lifted from another Donald Tillman article about Response Effects of Guitar Pickup Mixing.

Following the article, I was able to build the comb-filter configuration in the figure below:

With that configuration wired up in C++ code, I was able to get the expected frequency response:

Take note that these are actual frequency response plots. I am using Blue Cat’s FreqAnalyst, a realtime spectrum analyser plug-in, to monitor the output using a sine sweep from 20Hz to 20kHz as input to the filter. These graphs correspond exactly to the computed plots in the Response Effects of Guitar Pickup Mixing article.

Alas, the two pickup configuration above does not extend to three or more pickups. That’s where the article stopped with a rather unfulfilling conclusion: “It’s pretty complicated; I will not be going in an analysis of this here”. So it took quite a bit of time for me to figure out how to implement mixing multiple pickups. You can’t just run the filters in parallel and mix the results, no! If you add two sine waves, both 1kHz, the result will not necessarily be 2x sine wave at 1kHz. If the sine waves are out of phase, you will get 0! They will cancel out. We need to account for the phase! Now, we are going into the Superposition territory.

The diagram below depicts the three comb configuration for simulating three pickups:

This configuration can be extended for any number of pickups. What’s really nice about this configuration is that it is also possible to do all sorts of nifty things such as reverse phase connections and arbitrary control of mix levels for each pickup. Adjusting the mix between the two pickups makes it possible to cancel the fundamental, for example.

D1, D2 and D3 are the individual pickup delays as usual. D1C, D2C and D3C are the phase compensation delays. They are there to normalise the phase of each pickup to a common reference point at ½ the full length of the guitar from the nut to the bridge (i.e. the 12th fret). Given Ref, the reference point delay, D1C, D2C and D3C are computed as follows:

The observant reader will notice the fractional delays used here. They are needed for accurate frequency computations.

So, finally, with this three comb filter configuration, I was able to recreate the graph near the bottom of the Response Effects of Guitar Pickup Mixing article. Here’s the computed frequency response:

Finally, here are some audio samples. These are all recorded without effects (except the comb filters of course) from a Neo6 master sample (sustained E string). Yes, all these timbres came from a single source pickup!

Okidoki, that’s it for today. Next time, we’ll wrap up this three part article with a few more bits and pieces such as simulation of pickup aperture and compensation for the comb filter notches of the actual pickup. We’ll also cover emulation of humbuckers. Also, we might touch up a bit on user interfaces and real time control.