We want to push the limits of what we can do with the electric guitar. The Neo project (starting from the Six pack project) is a stepping stone towards our goal. And from the very start, our goal has always been polyphonic sustain. Polyphonic sustain, plus extensive processing for each string, will give us musicians full control over the dynamics of the guitar. This is my holy grail and as you can see in our previous proof of concept demonstration, we’ve come closer to that goal than ever before. 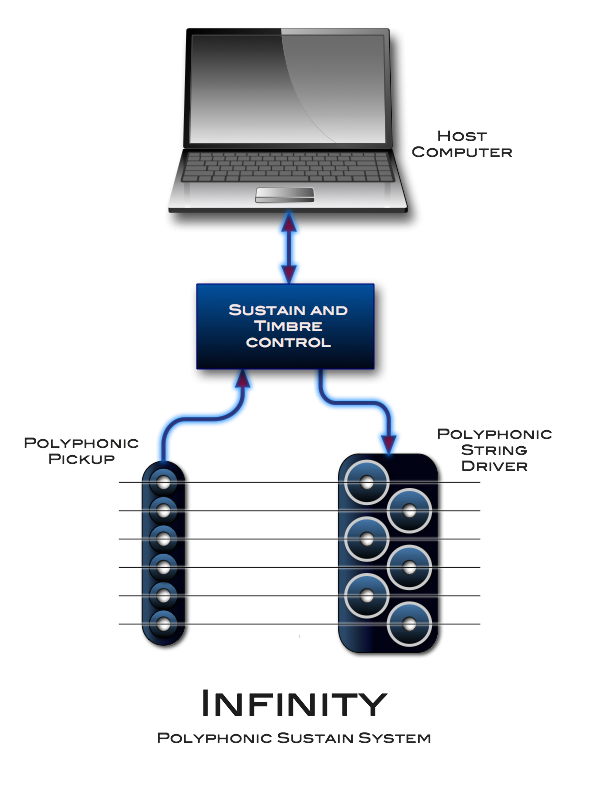 It takes a lot more than just slapping together six EBows. A very early prototype employed a 6x analog feedback system just like the Ebow. It worked but was rather unwieldy and impractical. The phase at the driver (neck position) lags behind the phase at the pickup (bridge position) and you need some form of phase shifting (using analog filters) to align the phase properly for sustained oscillation. Without phase shifting, you have to use more force than necessary to get the string to oscillate, and that wastes too much power.

All it should take is a little nudge. That’s what I always say. I think current breed of analog sustainers inefficiently use too much power. If you pull at the right moment with just the right amount of force, you can get something to oscillate indefinitely. That’s the essence behind sympathetic resonance. With just a little amount of force, at the right frequency (and phase!), you can make a very sturdy bridge collapse, for example.

We favor a digital approach with a microcontroller (MCU) doing the phase and frequency locking and synthesising a waveform that’s fed back to the driver (more on this later). A digital system vastly simplifies the required electronics. The MCU can do the phase corrections, analyse the envelope of the input and control just the right amount of signal to drive each string to oscillation. 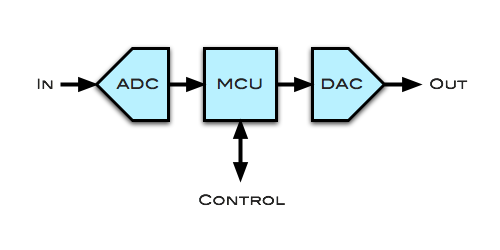 A digital system buys us a lot of flexibility. For instance, with a digital system, we can feed any kind of waveform back as long as it is coherent with the input. Recently, we’ve tried square, pulse, triangle and sawtooth. Wave tables would be cool, for example! How about samples of bow noises or wind blow noises? How about the human voice? Guitar or Piano samples? That might be cool. And, needless to say, there are no nasty squeals that plague analog feedback systems. It’s just pure sympathetic resonance! 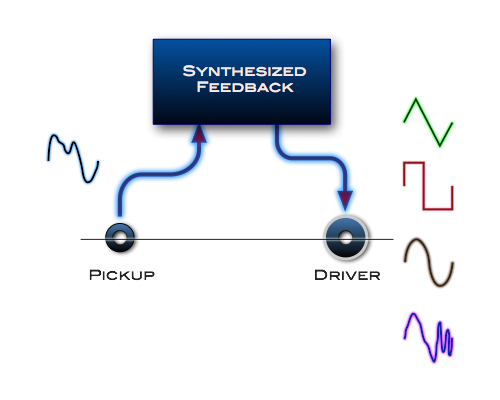 Acoustic synthesis is a powerful concept. It involves the creation of new sounds by controlling the vibrations of actual physical objects, in this case, the strings.

I’m sure most of you are aware that hexaphonic sustain has been done in the past with the Moog guitar (or the more recent Vo96 Acoustic Synthesizer). So what makes this project different? Unlike the Vo96 —a pure acoustic synthesiser, we opt to combine both traditional synthesis and acoustic synthesis. 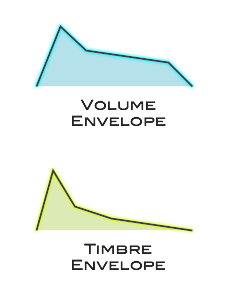 The Moog guitar, and the newer Vo-96 system use pure acoustic synthesis and advertises zero post processing. In my opinion, that is not necessary. You do not need an elaborate system for controlling everything, including timbre and dynamics. Just because you can do something, doesn’t mean you should.

Instead of pure acoustic synthesis, we prefer to post-process the polyphonic signal. You can do a lot with post processing on individual strings including control of attack and decay. An advantage of our approach is that it is simpler, requires less power, and does not require special strings! You only need to get the string sustaining, plus introduce some harmonics along the way. There’s so much potential in polyphonic processing that the Vo system shuns. A simpler system should cut the cost down considerably.

For example, we will not perform sustain dampening acoustically like the Moog did (the banjo effect). Instead, we intend to do DSP processing for each string. With post-processing, it’s easy to sculpt an envelope to achieve the muted banjo like effect. DSP processing will give us full control over the dynamics of the guitar (e.g attack, decay, sustain in addition to harmonic control). With these controls, you can have anything from banjo like short-sustain to long piano-like sustain and of course, infinite sustain. 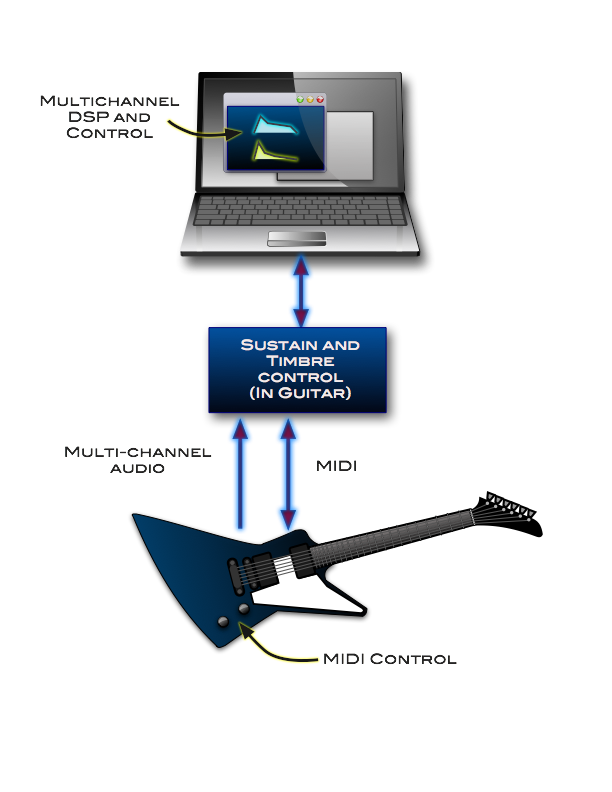 But it should not be limited to dynamics control. We’re also looking at timbre control and the injection of harmonics using various forms of synthesis techniques such as Waveshaping for timbre control (polyphonic fuzz in steroids!) and Kurplus Strong synthesis (e.g. having a number of virtual strings in memory excited by the inputs from the Neo pickup potentially modifying the parameters in real time). You can have drone strings, doubles, triples, etc. There will also be pickup placement simulation (using comb filters and short convolution for applying captured impulse response of other instruments (e.g. acoustic guitars).

The software is hosted in your laptop (or desktop). A software plugin (AU, VST, RTAS, AAX) does the multi-channel post processing and control; sending downstream MIDI data to the MCU inside the guitar for controlling feedback. The in-guitar MCU can also send upstream MIDI to control performance parameters (e.g. volume, pan, pitch-bend, cutoff-frequency, resonance, etc.) using potentiometers and other forms of user-control hardware directly from the guitar.